“This is the forest primeval. The murmuring pines and the hemlocks. . . Stand like Druids of old.” —Henry Wadsworth Longfellow, “Evangeline”

Months ago I wrote up a couple of posts about building a mono green deck. I went through a bunch of green cards to see which combination of them would work best. The aim was to make a (slightly) competitive green deck. I never expected it to go out and win all kinds of tournaments, that wasn’t really the point. I just didn’t want to lose every time I played it. I’m sort of revisiting the deck as it has changed and I’ve found that I play it more often than any other deck I’ve built. It has since become my go to deck. Anyone who has played against me in the New England area is probably familiar with it. 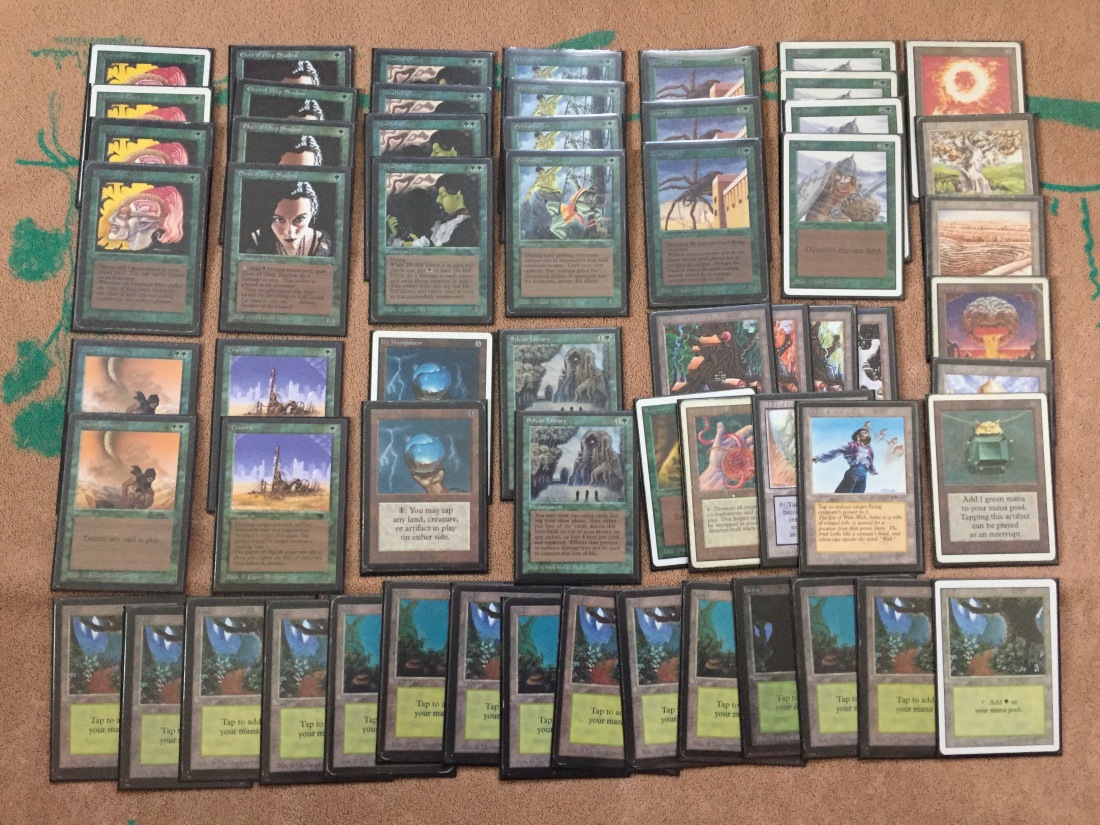 Green has so many quirky and fun creatures. The cool thing about mono green is you know it’s not top tier or even second tier, so you can rest easy by putting in some cards that you think  are fun to play. This is why I tend to play mono colored decks.

So let’s take a look at what the deck has become! 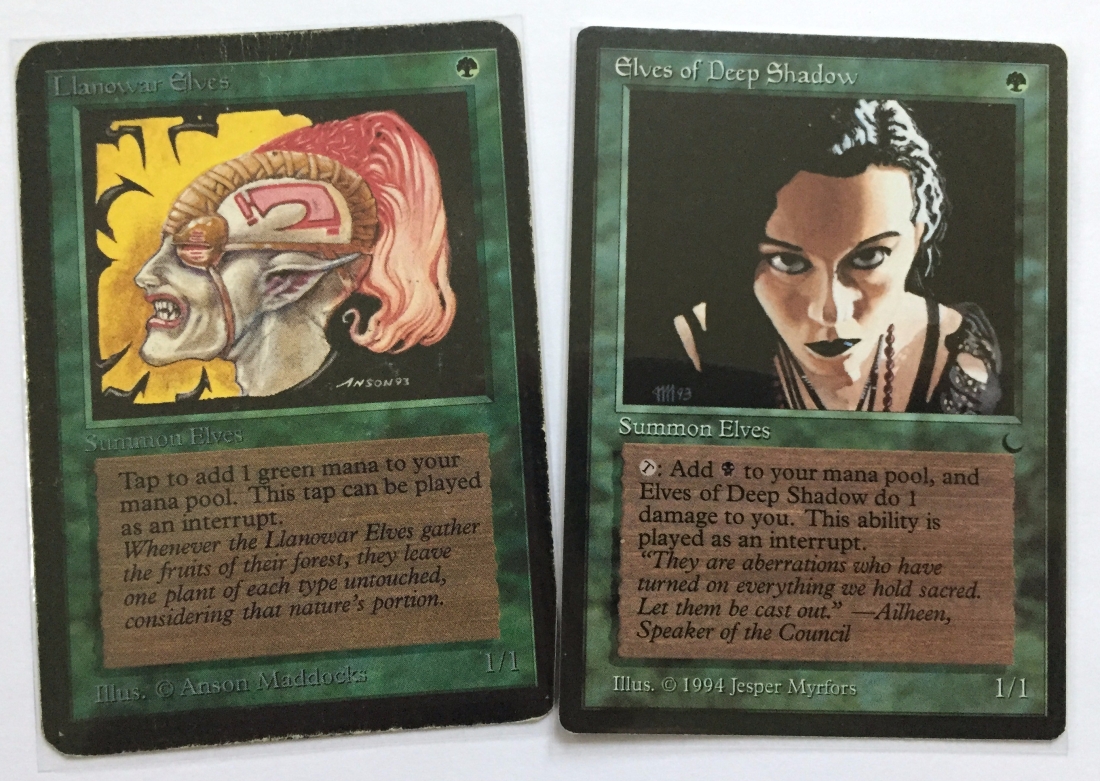 I have Llanowar Elves and Elves of Deep Shadow for tons of mana ramping. All the other creatures in the deck cost four mana to cast so eight mana-ramping creatures are crucial. I tried out other options for the four Deep Shadow elves spots like Gaea’s Touch, Fastbond, Wild Growth, and Birds of Paradise. It’s hard to say what the best option is after you have four Llanowars and I don’t think any of them are significantly better than the rest as all options are viable. Deep Shadow looks cool and works well with Pendelhaven so I went with them. If I had to replace them? Gaea’s Touch probably. Or maybe Wild Growth since I had one as a kid.

For the heavy hitters I have four Erhnams, four Ifh-Biff Efreets, and three Giant Spiders. The Erhnams are in there for obvious reasons. Erhnam is a strong creature and everyone knows how he works. The Ifh-Biffs are a lot of fun and I’ve found they are actually a bit stronger in the deck than the Erhnams. I put them in because of the flying ability which green seems to lack in. They also have awesome art and people are always surprised when they see it (“wow, the actual non-Serendib Efreet version!”). Ifh-Biff is a creature with a built in Hurricane as an instant. It shuts down Hypnotic Specters and can take out bigger flyers as well (while taking itself out). I’ve ended many games with his ability. His evil misprint twin Serendib is superior, though.

The Giant Spiders are probably making people wonder but I have them in there because it was one of the first cards I had as a kid. I remember getting it. Revised of course, but still, I thought it was awesome. I previously had three Juggernauts in place of them but decided recently to try something else. The Juggs get destroyed pretty much every time the second I summon them. Though it forces the action which can be good. However, I decided to try the Spiders because it’s a good defense against the two things I come up against all the time in the New England meta: Lightning Bolt and Serendib Efreet which the deck struggles against. The Spiders have performed well but I can’t say it benefits the deck hugely over the Juggernauts. Both are viable and situational. For now, I have a couple Juggernauts in the sideboard.

I always go back and forth between buying a Force of Nature for the deck. I would probably put one in if I had one. I should probably just buy a cheap Revised Force and try it out. 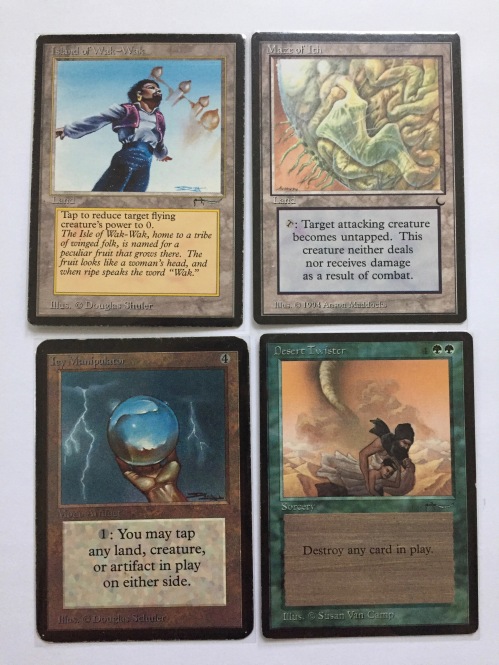 Creature control? Green has Crumble which is a pretty good artifact destruction card but green lacks in the creature destruction department. It makes sense, the forest brings life and mana, not death. This is where Desert Twister comes in. If it were cheaper to cast it would probably be one of the best removal cards in the format. It destroys any one card but it costs six mana to cast and it’s also a sorcery. Even with the mana ramping six mana isn’t always easy but it is doable. I have two in the deck and I think that’s a good amount. Since it can remove any card, it’s helped me hugely a bunch of times. Any more than two would make the deck worse though and one in the deck would probably be fine.

There’s the Chaos Orb which is always useful. The Disk which is mainly as a last resort as I typically have creatures out and a Sylvan Library. And then I have the Icy Manipulators, the Maze of Ith, and the Island of Wak-Wak. I use the Icys just to lock down threats mostly since I can’t always get rid of them. The Maze does the same but leaves the opponent with blockers. The Island of Wak-Wak is fun and it’s in the main deck because I love the card. With not much to work with for creature destruction, all these cards come in handy when you’re up against things like Serendibs, Serras,  Shivans, and Sengirs. Between the Spiders, Maze, Wak-Wak, and Icys I now hope my opponents cast Serendib Efreets.

The rest? The Sylvan Libraries don’t need any explanation. The Ice Storms are in the deck for a few reasons: for mana curve, for land destruction since it’s always helpful, and of course for looking cool.

And that’s the deck! 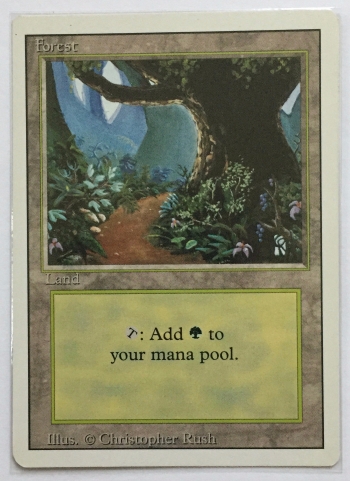 One more thing. The deck is entirely Swedish legal barring the one Revised Forest. I thought for a while that I ought to just buy an Alpha or Beta Forest and just complete the deck for Swedish legality but I decided not to. Alpha Forests aren’t expensive it’s just that I have a few things I’ve decided to keep in mind as far as my philosophy of playing Old School goes. What got me into Old School was that I wanted to play with cards that I collected as a young kid. Originally, I was just interested in Revised, Fallen Empires, Fourth Edition and Ice Age  because that’s what my small collection was made up of back then. It’s easy to get swept up in the black border hype which I’m guilty of. And I think the black border hype is okay to get swept up into but I also want to be satisfied with playing with Revised at the same time. For me, thinking less of Revised isn’t really in line with the motivations of what brought me to Old School in the first place. So I’ll be keeping the Revised forest for now…but another is reason is that I spent such an outrageously huge amount of money on cards in the last year that I sort of made a vow to myself to back off with spending money on cards for the foreseeable future.