It’s been almost a full year that I’ve been playing Old School Magic now. When I first started I didn’t know enough about the game to put together a decent deck. I’ve learned a lot in the past year. I’ve grown a decent collection, met a lot a of great guys, and made a blog. The popularity of Old School Magic has significantly grown since I got into the format as well.

If you haven’t heard, there’s now an Old School MTG podcast now out called Flippin’ Orbs. In the episode the two hosts both talk about a few of their favorite cards. It gave me the idea to write a blog post about some of my favorite cards. So here I’m going to look at some cards I’ve enjoyed playing over the past year. Some cards you might expect to be mentioned may not be listed. I still don’t own a Chaos Orb and have never flipped one so it won’t be mentioned. I’m sure it would be if I owned one.

Anyways, let’s get to it.

Ifh-Biff Efreet. Ifh-Biff is lesser seen compared to his Revised imposter, Serendib Efreet, but the original frilly necked efreet is one of my favorite cards to put out onto the battlefield. Often when I cast Ifh-Biff, people think it’s a Serendib at first. Ifh-Biff is a really strange creature for many reasons. One being the weird art. It’s a green skinned elf guy with a goatee and a perm. He’s dressed like an eighteenth century European aristocrat and, at first glance, he seems to be inspecting a bottle of wine. Knowing that he’s an efreet it’s probably the bottle he came out of or lives in. A while ago I posted a picture of Ifh-Biff on Instagram and someone commented saying that they weren’t sure if the green guy was the efreet or if the efreet was the cloudy stuff in the background. Jesper Myfors, if you’re reading this, call me.

The other weird thing about Ifh-Biff is his ability. It’s basically a built in Hurricane that can be used at instant speed. Also usable by your opponent. If you’re not playing against someone using green, this ability can be really powerful. Especially if you need to wipe out a bunch of flyers. I’ve heard people refer to Ifh-Biff as “Hurricane on a stick.” 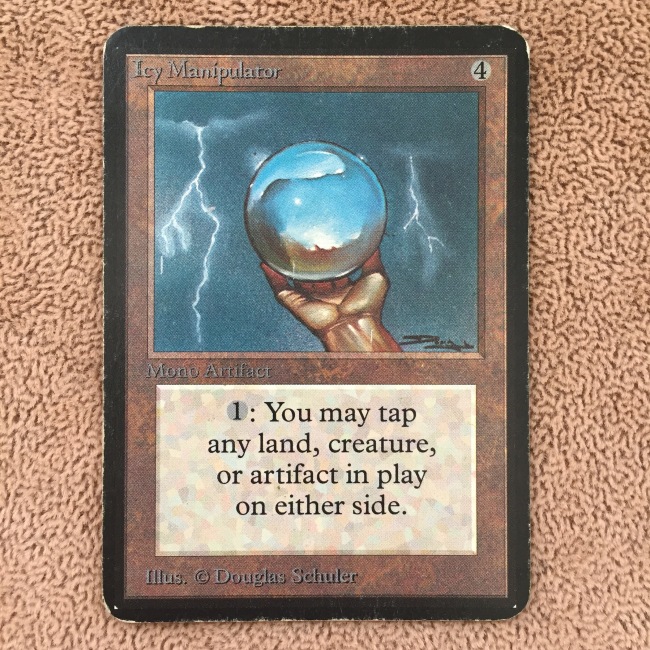 Alpha Icy Manipulator. The round corners of Alpha always look better than Beta no matter what. But sometimes the price difference between the two just aren’t justifiable. At least to me. However, there are a few cards that really are much greater in their rarer Alpha form. Icy Manipulator is one of them. Besides the corners the only difference really is the text. It has less wording and the text-size is bigger. The added text in Beta was to specify that when you tap a card its effects don’t get triggered. Also the Beta and Unlimited versions seem to be darker – like most of the corrected Beta cards.

Though there isn’t much of a difference, I think the Alpha version looks so much better than the Beta version. And I’m not alone in my opinion. The handful of cards that have unique features to Alpha are always desired over their Beta brothers because they represent that primal wild west that Magic once was. That wild west existed through Beta and further through a few more sets, but Alpha represents the fount from which all sprang forth and certainly has some strange things in the set. This is all evident in Alpha cards like Icy Manipulator, Birds of Paradise, Unsummon, etc… It’s fun when the enchantments on a creature are “CARD ed.”

Juzam Djinn. Probably the most notorious and badass creature in all of Magic: The Gathering, Juzam is simply a beautiful card. In my opinion, everyone should be playing a mono-black just to play some Juzams. Of course, that’s easier said than done. Su-Chi works as a pretty good substitute but isn’t nearly as fearsome as Juzam. I think at this point it’s safe to say that Juzam is my favorite creature. I think I’ll always have a mono black just for the Juzams.  Juzams are also way too expensive to not have them in a deck. on another note, a question I’ve seen a couple times is this: Is the Djinn giant or is the man just really tiny?

Sinkhole. Conveniently, Sinkhole, like Juzam, is a staple of the mono-black archetype which means that two beautiful cards get to be together in the same deck. How great is that? I’ve posted my Sinkholes a few times over on the Instagram and for some reason they always get a crazy amount of likes. Much more than anything else I post. I mean, they’re beautiful, especially being Alpha, but it’s not like people are always talking about Sinkhole. This particular Sinkhole is pretty worn – which I love about it. It must have destroyed a lot of land in its day. And it still has plenty of land to destroy in the future.

The first Old School tournament I played was last October in a pub outside of GP Providence. At the time I only had three Sinkholes but I realized the power of land destruction that day. Especially land destruction for only two mana. After the tourney I went over to the GP area and looked around at vendors and bought a fourth Sinkhole. 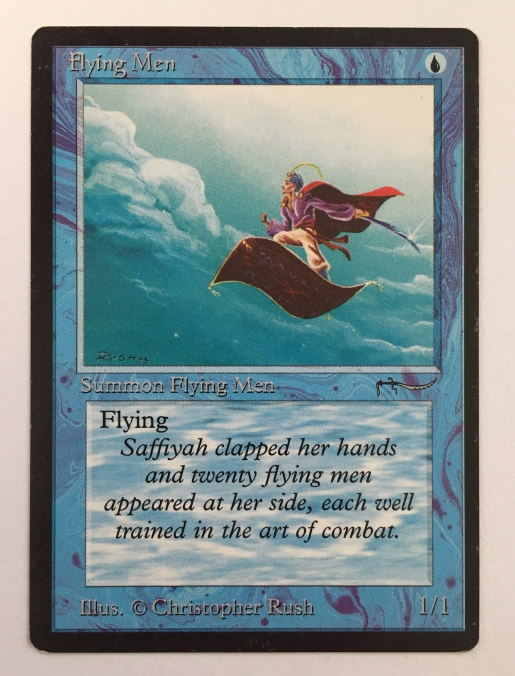 Flying Men. When I first got into Old School Mtg I was infatuated with blue. I put together a mono blue deck mostly modeled after Mg’s Suicide Blue. It just had a lot of cards I wanted to play at the time. I loved Merfolk of the Pearl Trident as a kid so it was fun playing a deck with four of them. I also really like the art on the Islands. And Flying Men was one of my favorite cards at the time. The art is awesome and it’s a pretty decent card especially if you get it out early with an Unstable Mutation. The deck wasn’t top tier but it was a pretty fun. I still do love everything about this card. 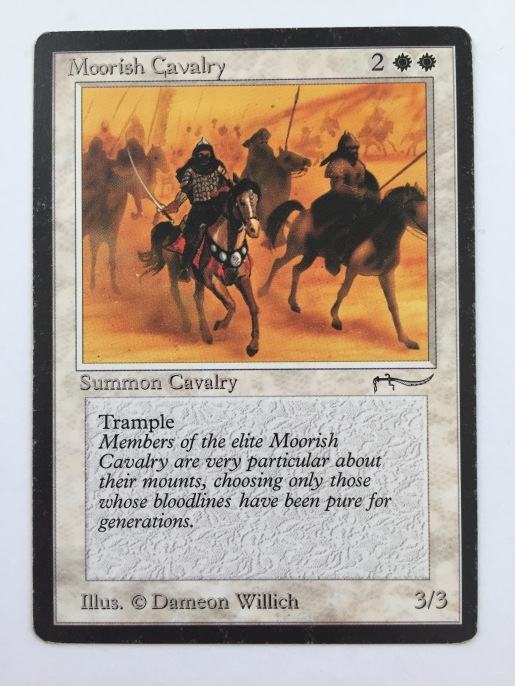 Moorish Cavalry. Of all colors I’ve played white the least this past year. I did make a couple white decks though. Each time I put together a mono white I tried to not make it a white weenie. The thing is, when you put together all the best white cards for a deck, it quickly becomes a white weenie. There are a bunch of white Arabian Nights cards that I think are pretty cool and not typically played so I always threw in a few Moorish Cavalries to break up the weenie part of the deck. It’s kind of a high mana cost for a 3/3 but if you have a Crusade or two out you’ve got a 4/4 or 5/5 with trample. A few times it won me some games at the kitchen table. It’s always fun to use a card that isn’t commonly used.

Lightning Bolt. One of the most iconic cards of the format, Lightning Bolt is super fun to play. I absolutely LOVE the art to Lightning Bolt. It’s so dark and ominous. The only colors in the art are different mixtures of black, blue, and a little white. Aesthetically, it’s similar to Icy Manipulator, another gorgeous looking card. If it wasn’t for Lightning Bolt I probably wouldn’t care at all about red. Well, that’s not totally true. I love Mons’s Goblin Raiders and Hurloon Minotaur – mostly because I thought they were cool as a kid. Shatter is pretty fun too. In general, I don’t often play much red though.

Lightning Bolt is awesome because of its versatility. It can be creature removal or just a burn to the face for the win. I imagine someone out there has a crazy burn deck filled with all the red burn cards printed over the years. Lightning Bolt, Chain Lightning, Thunderbolt, Shock, etc… That would be a fun deck to play at the kitchen table.

Library of Alexandria. THE library of all libraries. It’s a bit dirty but still just as beautiful as ever. Getting this card in your opening hand basically promises you two cards drawn per turn. It can be so strong that many people have argued that the Power 9 really should be the “Power 10” with Library of Alexandria included. It’s status is certainly legendary but still just a notch below the reputation of the Power 9. The god-like status the Power 9 have is untouchable by any other card at this point – no matter how powerful.

With all the land destruction in Old School the library often doesn’t stay out too long but even if you get just a few extra cards in the beginning of the game, it can be enough to secure a win. Library of Alexandria played a huge part in the first Magic World Championship in 1994 between Zak Dolan of the U.S. and Bertrand Lestree of France.

Mox Emerald. Lastly, here is the only Power 9 card I own. It’s in a mono green deck I have and man, every time I draw it in my opening it’s the happiest moment of my life. Well, not really. But it does make me very happy. I love it for two reasons: 1) I love playing green, and 2) I think the gem holder might be modeled after a moblin from Zelda. 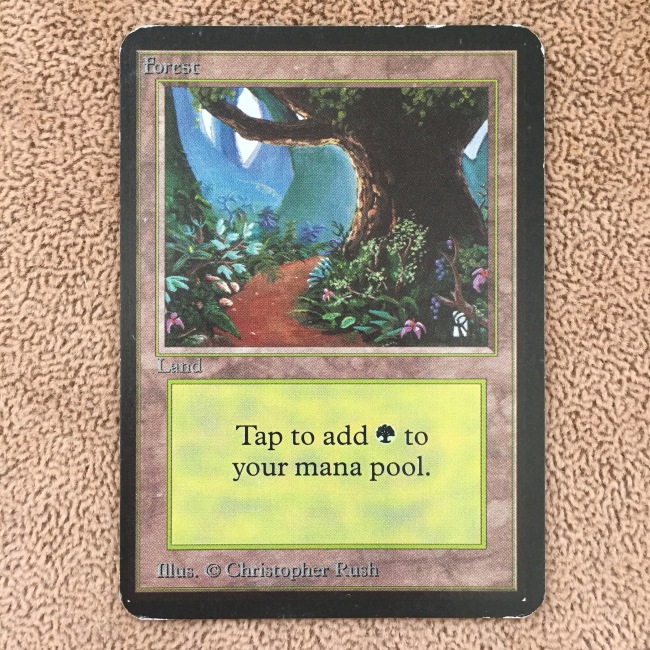 Forest. Last, but definitely not least, is just a basic Forest. This forest was one of the reasons why I love green and put together a mono green deck. I really like all three of the forests but this one is my favorite. It makes me want to jump into the picture and walk down that path. What’s around the bend? Probably Moss Monster.

This list of cards is by no means exhaustive. There are a bunch of other cards I’ve really enjoyed playing in the past year as well. And I tried to stop myself from just putting black and green cards. In the future, I’m sure there will be more cards that I’ll come to love that I haven’t already.  I also have a bunch of cards that I just haven’t gotten to building a deck around yet but I know I’ll love.

Is anyone able to guess what the title “Summoned from the Dreamrealms” is a reference to?

10 thoughts on “Summoned from the Dreamrealms: Some Old School MTG Favorites”