Skip to content
Taylor Uncategorized November 28, 2017November 29, 2017
The Isle of Wak-Wak, home to a tribe of winged folk, is named for a peculiar fruit that grows there. The fruit looks like a woman’s head, and when ripe speaks the word “Wak.”
Most of us are familiar with that very strange line. This is the flavor text printed on Magic’s strangest card, Island of Wak-Wak from Arabian Nights. The card doesn’t often see play as it’s effectiveness is conditional. I have it main decked in a mono green deck just because I want this card to see play. Looking to the art makes the card even stranger. Is this 70s pimp looking dude flying? He has no wings and the card makes it clear that on the island of Wak-Wak its inhabitants sport wings. And where’s the fruit that looks like a woman’s head? 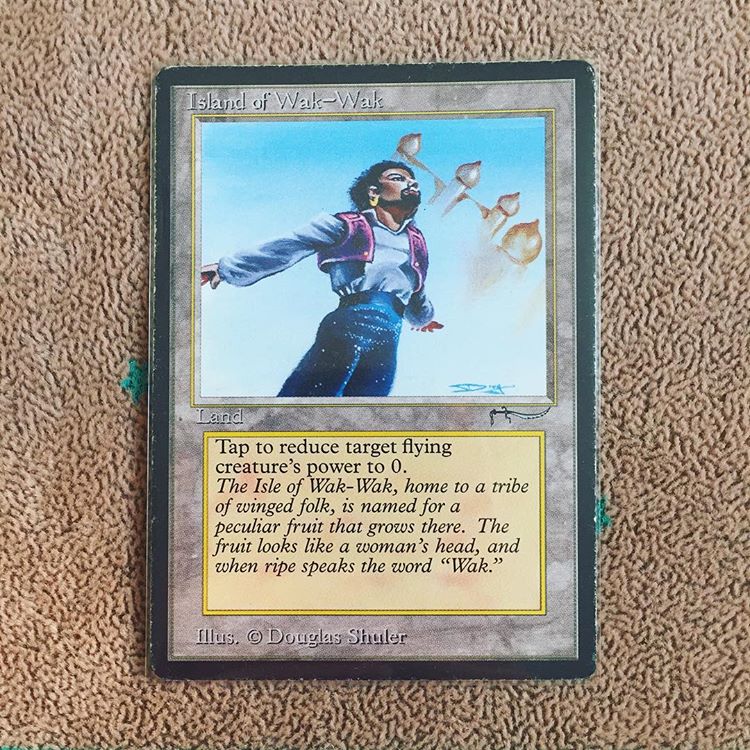 What, exactly, is the deal with such a strange card?
First thing, the flavor text in Arabian Nights was added last minute – the night before it went to printing, I believe. That means that when Douglas Shuler received the card info to work with for the art, all he would have received was the title and the card’s ability. No flavor text. So yes, it is indeed strange art but it makes sense why it doesn’t exactly match the flavor text. Imagine yourself as an artist. You have to make some art and the only inspiration to work off of is Island of Wak-Wak and Tap to reduce target flying creature’s power to 0. What would you draw up?
I would probably do a little research of just what the hell the island of Wak-Wak is. In 1993 researching something as obscure as The Island of Wak-Wak probably required a library (perhaps a very large one in Alexandria). Being from the Arabian Nights set we can assume its origin lies somewhere in the world of medieval Arabian culture if not the Arabian Nights text itself.
Today is not 1993 so we consult the Library of Google. A quick search results in only Magic: The Gathering related pages. However, at the bottom of the search page are some leads.

Wakwak bird? Wakwak Philippines? Could this lead somewhere? Yes it does. Through these related searches I landed upon a Wikipedia page titled Wakwak. The short passage describes the Wakwak as “a vampiric, bird-like creature in Philippine mythology.” It allegedly flies and eats human hearts. Sounds like a Chupacabra sort of thing. Okay, maybe this is related, but how? The Wakwak flies just like the card describes the people that live on the island. Though this description of a Wakwak is an actual creature rather than the island.

But wait! At the top of the Wikipedia pages is another lead! It says “For the legendary island or islands, see Wāḳwāḳ.” Here lies the truth!

This entry reads, “Wakwak is the name of of an island, or possibly more than one island, in medieval Arabic geographical and imaginative literature.” We’re on to something now!

The early medieval Persian geographer, Abu’l-Qasim Ubaydallah ibn Abdallah ibn Khordadbeh, better known as Ibn Khordadbeh, which his nickname is almost as hard to read as his full name, mentions Wakwak. He says, “East of China are the lands of Waqwaq, which are so rich in gold that the inhabitants make the chains for their dogs and the collars for their monkeys of this metal. They manufacture tunics woven with gold. Excellent ebony wood is found there. And again: Gold and ebony are exported from Waqwaq.” The entry then claims that Wakwak is referenced a number of times in medieval arabic literature and generally refers to an island that is far away. This is not indicating any specific island.

This is starting to make sense to me. I studied western history and philosophy in college and I came across similar ideas there. In a world where your own local area is the only place you have a map to, the bigger world is hard to gauge. Legends of magical and exotic far away lands were very common in this time.

Just think as far back as the Hebrew bible where it talks about the Garden of Eden. Where is that? It puts the location between the Tigris and the Euphrates rivers which means a location in modern day Iraq but people searched for Eden for a couple thousand years. And when the Europeans discovered the Americas, many believed the Garden of Eden was located somewhere there.

We’ve also all heard of Atlantis which originates in Plato’s Timeaus which he claims he heard from another guy who heard it while he was in Egypt which some people are still searching for to this day.

My favorite lesser known magical land is the kingdom of Prester John. A letter one day showed up and was quickly circulated throughout Europe in the twelfth century I believe. It was from someone who claimed they were a Christian king in a far away land in Asia somewhere. The kingdom was described as magical and that it contained the fountain of youth and all that sort of good stuff. Today the letter is actually believed to be a fake but nonetheless created legends that were chronicled for many centuries.

The story of Aladdin in the Arabian Nights text actually takes place in China. The point of that isn’t so we picture Chinese architecture, culture, and food or anything. It simply meant that the location of the story takes place extremely far away from where we are now and that far away place is magical and exotic and anything is possible there.  The place being China as opposed to any other far away place is irrelevant.

The concept of the Island of Wak-Wak could be the same thing. Just an island that none of us have been to but we know it’s magical and exotic and life is much different than where we are.

History lesson: Done. Back to Wakwak.

I still want more info. Reading further on the Wiki page it talks about an early medieval Chinese traveler who wrote about an Arab account of a tree that grows children. It also mentions an Iberian Islamic version that grows beautiful women as the fruit.

And check out this art from an old Arabic book called The Book of Wonders. Looks like they grow out of the fruit itself.

Wikipedia is helpful but I decided to look to some academic journals for further info. Unfortunately I no longer have access to any for free since I’ve been out of college for over a year but I was able to snag a not very helpful preview of an article called “The Talking Fruit.” It is about the legends of Island of Wak-Wak but the short preview didn’t add any more info besides that many scholars believed Wak-Wak usually referred to Japan. The article was published in October of 1939. I’m curious if there is more current scholarship on the subject today.

I then decided to Google search the actual flavor text. This is where I got the goods. I found a scholarly sounding blog post which had sources cited. The post is quite long and goes into great detail about the mythological Island of Wak-Wak and bunch of different versions of the story complete with the talking fruit and everything. Sometimes the fruit are women, sometimes men, and sometimes devils or demons. Read it if you want more info but it basically tells different variations which are all summed up in the flavor text on the card.

I also found a mention of it in the Arabian Nights text itself. It reads,

After this, we abut upon a mighty mountain and a running river contiguous with the Isles of Wak, which are seven in number and the extent whereof is a whole year’s journey for a well-girt horseman. And thou must know, O my son, that these troops are all virgin girls, and that the ruler over us is a woman of the Archipelago of Wak. On the bank of the river aforesaid is another mountain, called Mount Wak, and it is thus named by reason of a tree which beareth fruits like heads of the Sons of Adam. When the sun riseth on them, the heads cry out all, saying in their cries:— ‘Wak! Wak! Glory be to the Creating King, Al-Khallák!’ And when we hear their crying, we know that the sun is risen.

This is from Arabian Nights volume 8, chapter 2. It’s super long and there’s more mentions of Wak-Wak than what I have here but this post is getting long enough and I think the point is explained sufficiently.

So there we have it. We have at least a little bit of clarification on a strange card that rarely sees play! Looking into the history still doesn’t change the strangeness of it. Often, history itself – particularly what people believed about the world – is incredibly confusing to modern people. We live in a world with a strong scientific foundation which people of the past did as well, but our foundations are completely different. They wouldn’t have necessarily questioned a talking fruit, and it’s not because they are less smart, it’s just their foundation for understanding reality allowed for such a thing to exist.

With the recent buyouts the Island of Wak-Wak card has gone up in value quite a bit. I went back and forth with deciding to buy one for about a year while it sat at around 40 U.S. dollars. I wasn’t sure if I’d use it but I thought the strangeness of it was cool. Eventually I decided I could make it work in my mono green deck and it’s worked out decently well – sort of like a second lesser Maze of Ith. Fortunately I snagged mine right before it went up in price to around 75 U.S. dollars. Would I buy it at it’s current price if I didn’t have one already? Probably not. But I’m glad I have it and it’s fun to throwdown on a playmat.

3 thoughts on “A Fruit That Can Talk”